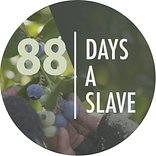 DONATE
Make a tax-deductable donation to help directly with production costs.
PARTICIPATE
Contact us if you'd like to get involved, or you have a story to share?
FOLLOW
Like and follow us on social media. Tag #88daysaslave and #88daysdoco
Christina Stenseth: Writer/Director
linkedin.com/in/csten
Mark Poole: CoWriter/CoDirector
linkedin.com/in/markjpoole
Penny Robins: Producer
linkedin.com/in/pennyrobins
TELL US YOUR STORY

Please let us know if you have a story to tell, or if you have questions, or if you think you can help in some other way. We'd love to hear from you.
STAY IN TOUCH

Do you know someone with a story to tell, put them in touch. Share and repost our trailer and direct people to this website.
TAG US

88 Days a Slave is a feature documentary currently in production exposing modern slavery taking place under the radar on Australian farms. The film is driven by director Christina Stenseth as she embarks on a journey across Australia exploring the dark underbelly of the infamous Working Holiday Maker program, and the reasons why it is allowed to continue.

Supported by Documentary Australia Foundation (DAF) and supported in development by Screen Australia, it is being produced by a team of multi-award winning documentary filmmakers.

Taking an observational approach 88 Days a Slave follows Chris as she meets these young people: some drawn in by the promise of adventure and a desire to explore this vast country whilst others came here with the prospect of working on farms and saving money but instead find themselves cheated and trapped.

These young people carry out their mandatory ‘88 days’ of agricultural work to secure an additional year in the land of plenty. But it’s not all roses; this poorly regulated program is the only way open for these young people to extend their visas, leaving many open to abuse and exploitation.

We follow Chris, who has experienced such farm exploitation firsthand and is determined to expose the abuses young international workers are forced to deal with. The WHM program has been going for many years but a number of recent changes have upped the ante. COVID-19 drastically changed seasonal work on rural farms, leaving farmers with rotting crops. Now after pressure from the UK, the Australian government is dropping the farm work requirement for British working holiday makers who make up 10% of the WHM labour force. To fill the gap the government will create an ‘agriculture visa’ where people from 10 ASEAN countries will come to pick the crops. It is a prime example of modern slavery.

Chris finds herself in the midst of the ongoing campaigning by WHM advocates to demand the EU to start negotiations with Australia to end all European participation in the ‘88 days’. Will other countries follow UK’s lead?

88 Days a Slave is a timely and urgent exploration of systemic abuses told through the eyes of the young people involved in the working holiday maker program.

The film is in production right now, and the producers are ready to hear from anyone who has a story to share.

Development has been supported by Screen Australia

Please consider making a tax deductable donation to the project:

Christina Stenseth is an emerging writer and director, originally from Norway who made her way to Australia in 2016 to complete her University studies. Christina holds a B.A. in Journalism from Deakin University and graduated from RMIT with a Master in Media with Distinction. Christina was invited to partake in Story Works, a program for filmmakers led by the Documentary Australia Foundation (DAF) and supported by Film Victoria. On 88 Days a Slave, Christina has teamed up with experienced documentary filmmaker Mark Poole. Mark’s films have screened around the world, he was a documentary series producer at ABC TV and he’s received many awards for his work, including the Richard Lane Award for screenwriting from the Australian Writer’s Guild. Mark is also the current Chapter Head of the Australian Directors’ Guild. Producer Penny Robins has extensive experience producing and executive producing a diverse range of multi-award winning documentary and drama productions for major networks including BBC, Canal Plus, SBS and ABC TV. Penny was a documentary development producer at ABC TV and executive producer at Film Australia and now produces through her own production company Annamax Media. Together these three filmmakers have been working closely for some time already, as they’ve been investigating, filming and beginning the process of bringing this film to life.

We are compiling lists of research findings, reports, media stories and investigations as well as details of legislation relating to the Working Holiday visa scheme and the agricultural sector. Please let us know if you're aware of others, or if you find that any of these links are broken. Read more about our findings here.

To be eligible for a WHM visa (subclass 417 or 462), you must have carried out a minimum period of 88 calendar days of work (6 months for a third year visa), including weekends or equivalent rest days during your period of employment, undertaking 'specified subclass 417 or 462' work. The Working Holiday Maker visa is administered by the Home Affairs portfolio for the Australian Government. More information about how the scheme works can be found on the Home Affairs page.

A message from 88 Days a Slave Director